The Story of Drinking Water

Do you know the story of drinking water?

The Egyptians were the first people to record methods for treating water. These records date back more than 1,500 years to 400 A.D. They indicate that the most common ways of cleaning water were by boiling it over a fire, heating it in the sun, or by dipping a heated piece of iron into it. Filtering boiling water through sand and gravel and then allowing it to cool was another common treatment method.

Water treatment is much more complex today and is discussed a bit later in this Web site. Click on “NEXT” to see what you know about water.

How much of the earth is covered in water?

About 70% of the earth’s surface is covered with water.

Ninety-seven percent of the water on the earth is salt water. Salt water is filled with salt and other minerals, and humans cannot drink this water. Although the salt can be removed, it is a difficult and expensive process.

Two percent of the water on earth is glacier ice at the North and South Poles. This ice is fresh water and could be melted; however, it is too far away from where people live to be usable.

Less than 1% of all the water on earth is fresh water that we can actually use. We use this small amount of water for drinking, transportation, heating and cooling, industry, and many other purposes.

What is water made of?

Everything is made of atoms. An atom is the smallest particle of an element, like oxygen or hydrogen. Atoms join together to form molecules. A water molecule has three atoms: two hydrogen (H) atoms and one oxygen (O) atom. That’s why water is sometimes referred to as H2O. A single drop of water contains billions of water molecules.

What three forms can water take?

Solid water — ice is frozen water. When water freezes, its molecules move farther apart, making ice less dense than water. This means that ice will be lighter than the same volume of water, and so ice will float in water. Water freezes at 0° Celsius, 32° Fahrenheit.

Liquid water is wet and fluid. This is the form of water with which we are most familiar. We use liquid water in many ways, including washing and drinking.

Water as a gas — vapor is always present in the air around us. You cannot see it. When you boil water, the water changes from a liquid to a gas or water vapor. As some of the water vapor cools, we see it as a small cloud called steam. This cloud of steam is a miniversion of the clouds we see in the sky. At sea level, steam is formed at 100° Celsius, 212° Fahrenheit.

The water vapor attaches to small bits of dust in the air. It forms raindrops in warm temperatures. In cold temperatures, it freezes and forms snow or hail.

What is the water cycle?

The water cycle or hydrologic is a continuous cycle where water evaporates, travels into the air and becomes part of a cloud, falls down to earth as precipitation, and then evaporates again. This repeats again and again in a never-ending cycle. Water keeps moving and changing from a solid to a liquid to a gas, over and over again.

Precipitation creates runoff that travels over the ground surface and helps to fill lakes and rivers. It also percolates or moves downward through openings in the soil to replenish aquifers under the ground. Some places receive more precipitation than others do. These areas are usually close to oceans or large bodies of water that allow more water to evaporate and form clouds. Other areas receive less precipitation. Often these areas are far from water or near mountains. As clouds move up and over mountains, the water vapor condenses to form precipitation and freezes. Snow falls on the peaks.

Would you believe that a dinosaur could have once used your last drink of water?

Water on earth today has been here for millions of years. Because of the water cycle, water moves from the earth to the air to the earth again. It changes from solid to liquid to gas, over and over again.

How is water cleaned?

Water treatment is the process of cleaning water. Treatment makes the water safe for people to drink. Because water is a good solvent, it picks up all sorts of natural pollutants. In nature, water is not always clean enough for people to drink. When the microscope was invented in the 1850s, germs could be seen in water for the first time. In 1902, Belgium was the first country to use chlorine to clean or treat water in a public water supply. Today, almost every city in the world treats their drinking water. Treatment includes disinfection with chlorine or other chemicals to kill any germs in the water. An example follows:

Click here to see the treatment plant in action

A water meter measures the amount of water coming into your home or business. Your water meter may be located in your basement or outside in a pit or hole. A meter reader reads the water meter on a regular basis. The utility bills you for the amount of water used. The bill covers the costs of treating and distributing the water. Sometimes, a utility must buy water. All of these costs and the wages for the utility’s staff must be met.

Water is a bargain. The average price of water in the United States is about $1.50 for 1,000 gallons. At that price, a gallon of water costs less than one penny. How does that compare with one can of soft drink? 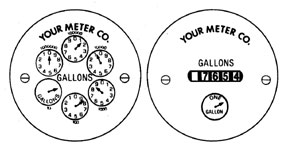 Water meters can measure in gallons, cubic feet, or cubic meters. The water meters shown here are measuring in gallons.

Find out how much water the Smith family used in one month. Just subtract the first reading (7,654 gallons) from the second reading (10,664 gallons) .